German Chamomile (Matricaria chamomilla) – is also known as ‘Wild Chamomile’. It is one of the nine sacred herbs of the ‘Lacnunga’ (a miscellaneous collection of almost 200 mainly herbal remedies, charms, and prayers found only in a mostly 10th-11th century manuscript in the British Library). 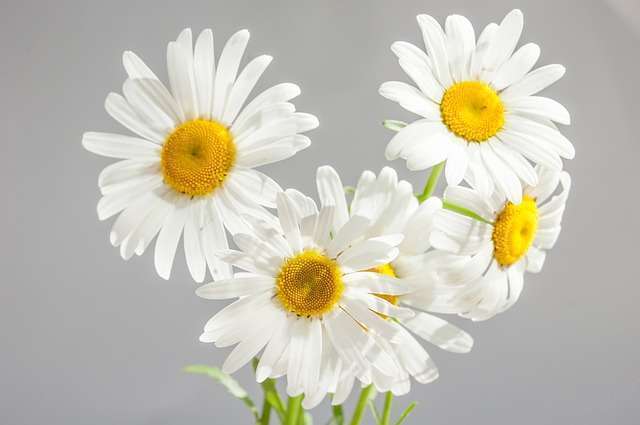 Description: German Chamomile is an annual herb in Europe, north Africa, and some parts of Asia; it grows to a height of approximately 60cm with a spread of 10cm. The flowers are about 20-25cm in diameter, white with conical yellow centres. The leaves are bright green, very finely cut and highly aromatic.

History: Chamomile was known to the Anglo-Saxons as Maythen, and they believed it had been given to them by the God Woden to use as medicine. The word chamomile comes from the Greek word ‘chamaimēlon’ meaning ‘earth-apple’. The ancient Egyptians used chamomile to treat fevers, and women’s troubles, the ancient Romans believed it to be a cure for the venomous bites of snakes and late-19th century herbalists prescribed its use for treating insomnia, digestive upsets and hysteria.

Chamomile is one of the most ancient medicinal herbs known to mankind. The dried flowers of chamomile contain many terpenoids and flavonoids contributing to its medicinal properties. Chamomile preparations are commonly used for many human ailments such as hay fever, inflammation, muscle spasms, menstrual disorders, insomnia, ulcers, wounds, gastrointestinal disorders, rheumatic pain, and hemorrhoids. Essential oils of chamomile are used extensively in cosmetics and aromatherapy. Many different preparations of chamomile have been developed, the most popular of which is in the form of herbal tea consumed more than one million cups per day.

Chamomile is known to be used in various forms of its preparations. Dry powder of chamomile flower is recommended and used by many people for traditionally established health problems. Medicinal ingredients are normally extracted from the dry flowers of chamomile by using water, ethanol or methanol as solvents and corresponding extracts are known as aqueous, ethanolic (alcoholic) and/or methanolic extracts.

Celtic Earth Spirits German Chamomile Flower Powder is Wildcrafted and sustainably harvested in Egypt in an area free from pollutants – a certificate of analysis can be provided. It can be found here in our Herbal Apothecary